Introducing Thompson® Gold and Chrome Versions of the “Chicago Typewriter®”

Greeley, PA – Auto-Ordnance is proud to introduce an exciting and classy look to their century-old Thompson, historically referred to as the “Chicago Typewriter”. The Thompson 1927A-1 semi-automatic carbine is now offered in a Titanium Gold finish and also a Polished Chrome.

Either of these time-honored reproduction semi-auto carbines will undoubtedly impress your friends when you take it out to the shooting range. These guns are offered in .45 ACP and have a 16.5” finned barrel (18” with compensator), with a 1 in 16 right-hand twist. The frame is constructed in steel with either a Titanium Gold finish or a Polished Chrome finish. The gun weighs 13 lbs. and has an overall length of 41”. Other features include a pinned in front blade and an open rear adjustable sight. The stock is fixed and is made from luxurious American Walnut and has a vertical foregrip. These two new models each ship with one 50-round drum and one 20-round stick magazine. The magazines too are plated in either polished gold or chrome.

“The uniquely iconic look combined with the history of the ‘Tommy Gun’ have always had an extremely strong appeal among gun owners” said Frank Harris, VP of Sales and Marketing, Kahr Firearms Group. “We introduced these at SHOT Show this year and people were lining up just to have their picture taken holding one of our new polished finish Thompsons. We really expect the gold and chrome finishes on the Thompson 1927A-1 to be popular with the gun community – especially among collectors.”

Both the Titanium Gold (Model Number T150DTG) and the Polished Chrome (model number T150DCR) carbines are shipped in a protective hard case which features both the distinctive Thompson logo and the words, “Chicago Typewriter”. To truly capture the 1920s gangster era, an aftermarket violin case can be ordered for the Gold or Polished Chrome Tommy Gun. For a limited time only, the introductory MSRP is $2963 for either the Polished Chrome or the Titanium Gold. The cost of the violin case is an additional $221.00. 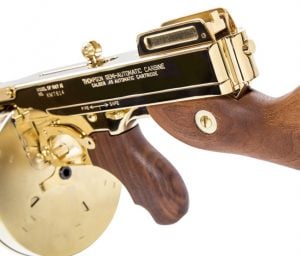 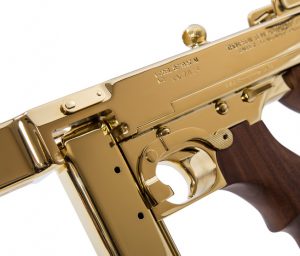 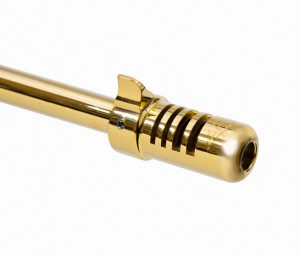 Greeley, PA – For the second consecutive year, Kahr Firearms Group is proud to be a sponsor of the IDPA West Virginia Championship. The event will take place at the Peacemaker National Training Center in Glengary, WV June 3-5, 2016.

“Last year, Kahr Firearms Group was a contributing sponsor of the IDPA Championship. The 2015 event drew in over 150 shooters, and we really appreciated the opportunity to share our pistols with this talented group of shooters. This year, we decided to become a title sponsor so we could offer even more support to IDPA” said Frank Harris, VP of Sales & Marketing, Kahr Firearms Group. “We are proud to sponsor an event that brings together some of the top defensive pistol shooting enthusiasts in the world. This championship brings together civilians, law enforcement, federal agents, retired military, and also some international shooters. It is a fun event to attend and a great organization for us to support.”

The International Defensive Pistol Association (IDPA) has clubs throughout the USA and internationally. The focus of IDPA is to hone sport-based defensive handgun shooting skills and give shooters with mid-level to expert shooting skills an opportunity to compete against each other in various divisions for rankings.

“The 2016 match will improve over last year by adding even more props, movers, vehicles, challenging stage designs, and better Safety Officer incentives” stated IDPA Match Director, Cody Claxton. “With Kahr as our title sponsor, we will also have even more great guns to give away. It will be a truly fun event for everyone.”

“There will be 7 divisions in total at the match and shooters will participate in 12 defensive handgun stages of fire” stated Cole McCulloch, President Peacemaker National Training Center. “Each stage is based on real time defensive concealed carry scenarios involving moving targets, vehicles and even an airplane. The event is open free of charge to spectators. We are thrilled that Kahr Firearms Group is our title sponsor this year. Kahr pistols are ideal because they are highly concealable, practical and fit the Compact Carry Pistol and Back Up Gun Divisions now offered in IDPA.

Greeley, PA – For more than 100 years, the “Chicago Typewriter”, the time-honored submachine gun, has been a favorite among collectors and shooting enthusiasts. Now, Kahr Firearms Group has given the semi-auto version a more authentic look with the introduction of their new barrel design on the Thompson T1-14 carbine. With a barrel length of just 16.5”, it is 1.5” shorter than the existing T1 models with the 18” barrels.

The .45 ACP caliber T1-14 has a permanently affixed Cutts compensator which lengthens the finned barrel length to 16.5”, and puts the overall length for the carbine at 39”from buttstock to muzzle. The BATFE recently approved the permanently affixed Cutts compensator as a part of the barrel. The pinned Cutts compensator offered on the 18” barrel models are not considered part of the barrel. This model also features a blade front and open rear adjustable sight and weighs 12.5 lbs. The fixed stock is crafted in luxurious polished American Walnut and has a vertical foregrip. MSRP is $1,461.

Another addition to the shorter barrel 1927A-1 collection is the T1B-14, which specs the same as the T1-14, but instead of a walnut fixed stock, it comes with a detachable buttstock with vertical foregrip. Both models are available in .45 ACP and ship with one 20-round stick magazine. The MSRP on the T1B-14 is $1,910.

They dress up as gangsters, cops, flappers, and other types from the Prohibition era. They use guns from that period, and compete while in costume. They say they’re “bringing back the Roaring Twenties!”

I’d heard about the members of the American Zoot Shooters Association (AZSA), but I didn’t expect to run into any of them.

It was a hot mid-summer day at the 2015 Industry Masters, an event held to raise funds for the National Shooting Sports Foundation’s First Shots program. This year’s event took place in Kansas, near the Oklahoma border, where temperatures hovered around 100 degrees, and the humidity spiked quickly into the soaking-wet zone.

Most of the handgun, rifle, and shotgun shooters were wearing shorts, t-shirts or shooting shirts, ball caps and cooling neck wraps … except for the three guys from Colorado wearing three-piece zoot suits. They even had ties and period hats from the Roaring Twenties. The Masters’ theme centered on the 1920s, so it was fitting that the AZSA showed up to run a side match that featured Tommy guns and single-stack Model 1911 pistols.

Greeley, PA – Kahr Firearms Group is proud to be a Sponsor of the NRA World Shooting Championship. The event will take place at the Peacemaker National Training Center in Glengarry, West Virginia, September, 24 – 26.

The 3-day event challenges shooting enthusiasts to compete in 12 separate shooting stages to earn the title of World Shooting Champion. Competitors will be provided with all ammunition and firearms to keep the competition on a level playing field while they compete for more than $250,000 in cash and prizes.

At the .22 rifle stage, competitors will be using the Magnum Research MLR22ATUT. This .22 caliber rifle is one of the newer products from Magnum Research. The rifle features the new high-tech, modular tensioned-type, 18-1/2” long Ultra Barrel. It utilizes a superior quality of steel for the barrel, attached to a stainless steel breech and muzzle caps inside a thin-walled aluminum construction. The MLR22ATUT measures 36-5/8” in length and weighs just 4 lbs. 8 oz. This model can also accommodate a suppressor and has muzzle threads of ½ x 28. Other features include: 1 in 16 twist, Bentz chamber, a black polymer ambidextrous thumbhole stock design with a comb designed for scopes, integral Weaver-type scope mount base on the receiver, and an extended magazine release. The rifle retails for $596.00.

In a separate side-match, Kahr Firearms Group will give shooters the opportunity to shoot the soon-to-be-released Gen2 Series 9mm pistol. The TP90R935 is a 9mm pistol measuring 7.5” in overall length, has a 5” barrel, an overall height of 5.08” and weighs just 20.52 oz. The TP90R935 has an 8-round capacity. It is equipped with TruGlo® rear and front night sights. The model used for the side-match will be fit with a Leupold® Deltapoint ™ reflex sight. Kahr plans to start shipping the new Gen2 Series beginning in November 2015.

For more information on the NRA World Shooting Championship, go to https://home.nra.org/events/document/nra-world-shooting-championship.

Greeley, PA – USA based, Kahr Firearms Group are now officially Pennsylvanians. The firearms group ceremoniously cut the ribbon at the grand opening of their new headquarters on Tuesday, August 11th in Blooming Grove Township in Pike County. The construction was completed in just 19 months since breaking ground in May 2014.

The 40,000 square foot building is the new corporate headquarters and is considered “Phase I” in the construction. The building contains offices for the 20+ employees, warehousing and shipping, and also R&D Engineering. Plans for Phase II and Phase III are still in the development stage at this time.

The structure also houses two underground, 100-yard firing ranges. The underground ranges will be used exclusively by Kahr Firearms Group for testing and development of their extensive product lines and should not disturb nearby neighbors or the wildlife that call the 620-acre parcel home.

“We are very proud of the long and respected reputation of our three brands. We are also proud that our presence in the firearm industry supports the basic freedoms that each of us has because of the Second Amendment, but now is the time to focus on the future.” stated Justin Moon, Kahr Firearms Group CEO. “As we continue to expand our business in Pennsylvania, we look forward to bringing jobs to Pike County and also hope that we can convince other firearms industry companies to join us on this 620-acre property. Our job is far from over here.”

The plan for the new headquarters will also include a factory outlet retail store, likely to open sometime in 2016.

There are no plans at this time to close manufacturing plants in either Massachusetts or Minnesota, but starting sometime in 2016 some manufacturing and production will be conducted from the new Pike County location. 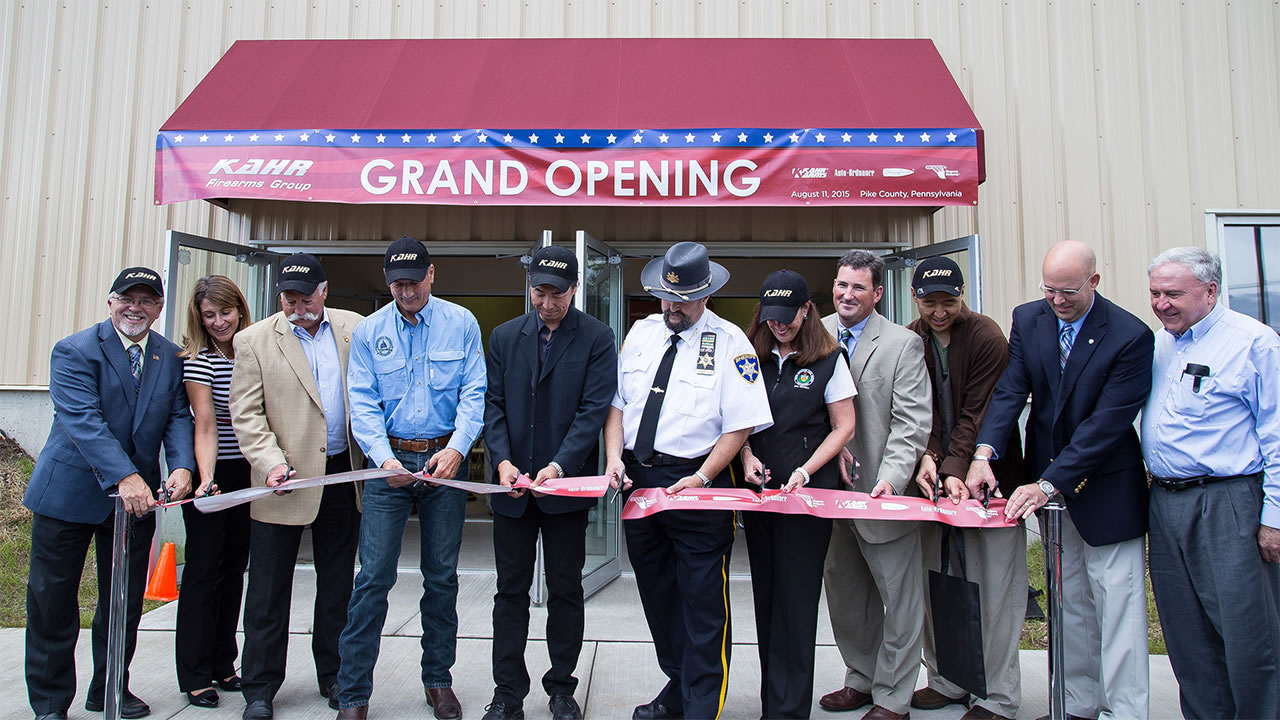