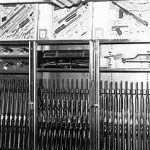 The F.B.I. gun vault at Quantico, Virginia. Note the preponderance of Remington Model 81 Police Rifles (two rows in left cabinet and one more row behind Thompsons in center cabinet). Eleven Model of 1928 Thompsons are visible in the front row of the center cabinet, plus one more in pieces mounted on a training board (above right rack), and one more with a “L” drum (at top right). 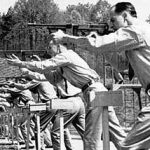 F.B.I. Agents firing Model of 1928 Thompsons at their range in Quantico, Virginia.
Read more
No Comments

George E. Goll, General Thompson’s “rifleman demonstrator”, firing a burst from the Model of 1921 before an interested audience of British officers at Camp Bisley, near London, England, during General Thompson’s European tour in the summer of 1921. Note the ejected empty cases, arcing above the gun. 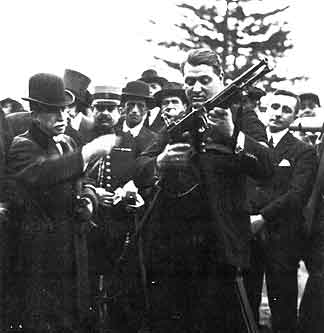 An Auto-Ordnance sales representative demonstrating a military Model of 1923 Thompson for Augusto B. Leguia (hand outstretched), President of Peru, about 1923. Note the bipod, folded under the barrel.

Upon his return to the U.S. after his European tour General Thompson kept up the pace: in this famous photograph he demonstrates his Model of 1921 Thompson “trench broom” with butt stock removed, to an admiring throng at Camp Perry, Ohio, in August, 1921. Note the accessories displayed on the table, center.
Read more
No Comments 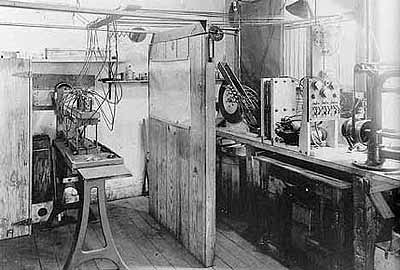 A portion of the Auto-Ordnance machine shop and testing room in the Sabin Machine Company building in Cleveland, 1918. On the left is the test firing platform and steel pipe leading to the bullet trap (figs. 10 and 12); on the right, behind the protective screen, is a spark chronograph invented by Oscar Payne to measure the motion of the bullet. This device allowed the first accurate measurements of the “coefficient of friction” of various cartridges, thus highlighting the serious incompatability of the powerful .30-’06 with the Blish system, compared with the strong suitability of the .45 A.C.P.

John Taliaferro (pronounced “Tolliver”) Thompson was born in Newport, Kentucky on December 31, 1860.
He graduated from West Point in 1883, and became the youngest Colonel in the U.S. Army. He was Chief Ordnance Officer for General Shafter’s Expeditionary Forces in the Spanish American War. It was there that he realized the necessity for increasing the firepower of the soldier, and began his quest for a more efficient small arms weapon.
Appointed Chief of the Small Arms Division of the Army Ordnance Department, he supervised the development of the M1903 Springfield Rifle, considered for many years to be the perfect rifle for military use.
Early in his new capacity, General Thompson believed that the only available means of equipping the greatly expanding armies of the United States with small arms was to adapt the caliber .303 Enfield to the caliber .30 cartridge manufactured in the United States. This would utilize existing manufacturing facilities for the continued production of both Springfield and Enfield rifles.

When World War I broke out in Europe in 1914, it became obvious that the production of military small arms on a large scale in the U.S. would become necessary. Col. Thompson resigned from the Army to enter this field, and was appointed Chief Engineer of the Remington Arms Co. While serving in this capacity he designed and build the Eddystone Plant at Chester, Pennsylvania, which at the time was the largest small arms plant in the world. Under his supervision, this plant manufactured great numbers of Enfield rifles for the British, and “Three-Line” (7.62x54R caliber) Moisin-Nagant rifles for Russia.
Upon the entry of the United States into the war in 1917, he re-entered the Service, reaching the rank of Brigadier General and as Director of Arsenals was placed in charge of all small arms production.
For his achievements he was awarded the Distinguished Service Medal by Congress.