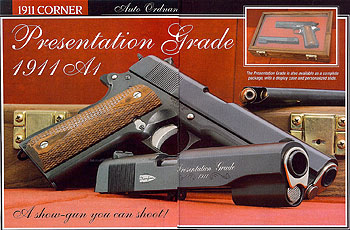 A show-gun you can shoot!

Those of us who now look wistfully at the Grecian Formula commercials remember a time when manufacturers could afford to lavish huge amounts of skilled hand labor on their guns. It was a different era, with a slower pace of both life and industry As amazing as it seems today, trained craftsmen—artisans of their trade—were less expensive on the line than were machines. It was a time when firearms were actually fitted, parts hand-honed to mesh, created rather than mass-produced. And the finishes back then were a sight to behold. Bluing so incredibly rich and deep that the surface actually looked wet. That kind of surface preparation, which is of course the key ingredient to a great finish, doesn’t come easily. There’s little doubt—since a gun can be either made or ruined during the finishing process—that companies put some of their very best and most highly trained personnel in the polish and finish areas.

Heavy hands on a buffing wheel can blur lines, dish-out pinholes, smear roll marks, and manage to put waves in flats—and they can do it all in an instant. Great work takes time, and as always, time means money. In reality, the manufacturers had little choice but to simplify the entire process in order to deliver a product at a price the public could stomach. The shooting public has learned to live with less—with the requisite amount of bitching and moaning, of course.

We’ve reviewed pistols from Auto-Ordnance in the past, and when the box containing this gun arrived we expected something similar, a mil-spec recreation 1911A1 in a Parkerized finish. Not this time. Instead we got a high-polish, royal-blue, presentation-grade 1911 that—with the exception of its bright nickel accents—looked like a relic from the past. Digging a little deeper into the shipping container brought us to a glass-topped, padded, wooden presentation case, finely crafted with brass hardware, including lockable clasps. Inside this box was another complete top-end for the gun—complete as in slide, barrel and all other small parts—that was almost a dead ringer for the one already on the frame, with a couple of little additions. The left flat of the installed slide was roll-marked “Model 1911A1 U. S. Army,” while the right side was blank. In contrast, the flat on the right side of the dress slide was engraved with “Presentation Grade 1911” and the Thompson logo, while the left side flat was engraved with the name of the owner and the year of presentation. With the exception of some find-line scroll work to set off the script, the engraving was filled with nickel to match the accents on the gun. Just above the owner’s name, in small print, was the legend “Hand Crafted for.”

The bluing looked like black oil, and the flats were straight and true, The transition lines from the round top to the flats were crisp. This was definitely not the work of a rookie, A note in the box from our editor asked that I call Bob Holmes at Auto-Ordnance for some background on this latest offering. It was his name on the side of the pistol we received, and he is also the person in charge of the Auto-Ordnance custom shop. I’m glad I called. Bob is one of the industry good guys. He’s enthusiastic about the products the company produces and is always on the lookout for ways to improve. He, too, remembers the glory days of gun building and their remarkable finishes, and this pistol is his brainchild as well as his tribute. His goal was to not only duplicate that incredible finish, but also to make the pistol both affordable and shootable. This is where his idea of offering two complete slide assemblies entered the picture: one to be used for fun; the other to be used for display. Purchase of the personalized display slide and presentation box are not mandatory, however, as both are sold separately, or as part of a package.

Auto-Ordnance pistols differ from those of many other makers by the addition of a trigger-controlled firing pin safety. Unless the trigger is pulled and levers inside the frame are activated, a spring-loaded plunger resting in a hole machined in the slide stops the firing pins forward travel. This system has been in production for many years and has been tested and proven on the streets. Other than that, it’s exactly what you’d expect from a 1911A1 pistol, including a wide spur hammer, arched mainspring housing with lanyard loop, Al sights, and a longer grip safety spur to help prevent hammer bite. The frame is cast and the slide is machined from a forging. As mentioned earlier, the small parts are bright nickel, and include the grip screws, thumb safety, barrel bushing, recoil spring plug, trigger, plunger tube, magazine catch, and slide stop. In a later conversation with Bob, I mentioned that I thought the gun would be even more spectacular completely blued, without the addition of nickeled parts. I’ve since heard a change is in the works. He listens! Both versions will be available.

I’ll confess right up front to only test firing this pistol with the “stock” top end. My conscience wouldn’t allow me to put rounds through that presentation slide. This is not marketed as a target-grade gun, but I still found group sizes to be totally acceptable. Mil-spec sights are tough to shoot. I’ve said it before and it bears repeating: tiny sights make precise work virtually impossible. There are those who, in their quest to keep things “original,” insist that fine work can be accomplished with tiny sights. “Balderdash” is a word I’ve wanted to work into my writing for years, and this certainly seems like an appropriate place. The miniscule A1 sights wash out against the target no matter what the light. Precise work with them is highly unlikely, and fast work is a fantasy. This is not a knock on the pistol. It’s a period piece with faithfully reproduced sights. This is simply a way of saying that the gun could easily be a better shooter than the results show. I fired several different brands and bullet profiles through the pistol without a failure of any kind. Not one.

I recently received some 185 grain Gold Dot Personal Protection hollow points from Speer, and have been waiting for a chance to test them. I shot them last, and when the first round tore. downrange, the woods went quiet. Really, Even the cicadas, which have been vocally complaining about the midsummer heat for weeks, momentarily ceased their serenade, shocked into silence. The report’s return, after a quick journey to and from a distant hill, carried enough authority to be heard through my shooting muffs. These rounds speak with gravitas! I like ‘em—a lot. And they shoot. Thankfully, their roar was much greater than their bite. Recoil was extremely mild; less than a mid range 230-grain load. I’d have to assume the 185-grain bullet has a lot to do with that, in spite of it passing over the chronograph at 945 f.p.s. The pistol showed a definite preference for lighter weight bullets. It turned in its best accuracy with 185- and 200-grain loads.

The Auto-Ordnance Presentation Grade 1911A1 would make a great gift for a special occasion, but why wait for someone else to take the hint? Buy one for yourself!