As told to Art Moore by Walter Hughes, WWII veteran at the NRA Show:

While at the first day of the NRA show, I had the pleasure of meeting Walter E. Hughes, a WWII paratrooper that had jumped in Holland during Operation Market Garden with I Company of the 504th Regiment, 82nd Airborne. He was very interested in Thompson/Auto-Ordnance Tommyguns and M-1 Carbines. He told me how paratroopers would pin a set of “jump wings” on the leather cheek pad on the AOM150 Paratrooper folding stock. I introduced him to everyone in the booth and we all enjoyed visiting with a member of this legendary paratrooper regiment. 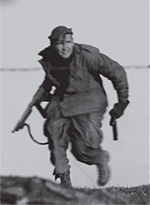 On the second day of the show Walter, as he insisted on being called, returned to the booth and said “You have my picture in your catalog!” He pointed to the pictured in the top, right photo on page #6 (next to 1911 pistols) of our Thompson Auto-Ordnance catalog. He is running with a tommygun in one hand and a couple of magazines in the other. It was clear to see that he was correct. Walter told me the circumstances of this photo. After making a combat jump into Holland, the 504th was engaged in the battle made famous by the movie A Bridge Too Far and HBO’s series Band of Brothers. During one of the many battles, an I Company Lieutenant called to Walter and said “There are three Germans with a machine-gun up the road and they are holding up this war! Clear ‘m out!” Walter replied, “Sir, that sounds like another job for the Sergeant.” The Lieutenant barked “Sergeant Hughes, clear ‘m out!” During the following action, Walter’s photo was taken by a Stars & Stripes correspondent who was lying in a ditch, without Walter’s knowledge. Walter said “I almost shot the guy!” The photo appeared on the cover of Stars & Stripes newspaper and got Walter in trouble with his Major because he didn’t have his helmet on. Walter said the Major really liked the exposure for the unit and commented that you could give a paratrooper a Tommygun and some ammo and he’d get the job done. The photo later appeared on a Belgian postage stamp which honoring the liberation of Holland by the Allied Armies.

Meeting Walter Hughes was a true pleasure and hearing his stories about the Tommygun made me proud to continue our efforts to provide Thompson and Auto-Ordnance products which are truly “A piece of American History”! 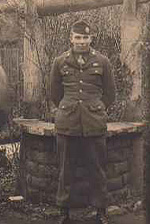 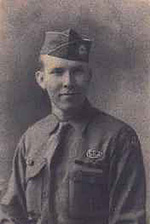 Other Information: Walter served with I Company of the 3rd Battalion 504th Parachute Infantry Regiment after joining the regiment as a replacement in August 1944, after the 504th PIR had jumped into Sicily. His first combat jump with the 504th was into Holland where he, along with the rest of the 82nd Airborne jumped into the area near Nijmegen at the Grave DZ.

Later, as fate would have it, Walter found himself in an unusual position for airborne troops, when he joined the rest of the 504th PIR led by Julian Cook in rowing across the Waal River to assault and capture the Nijmegen Bridge. Walter continued with the 504th as they battled through Holland, Belgium and finally “All the way to Berlin” where he formed part of the occupation army until his discharge. On of his proudest moments occurred when he joined the 82nd Airborne in making a parade through the streets of his home town New York as part of the Victory celebrations that marked the end of the war.