Auto Ordnance has faithfully reproduced a late WW2 M1 Carbine for those of us who appreciate its excellent handling qualities and petite characteristics such as simple flip sights and lack of bayonet lug. Repro buttstock pouches and sling/oiler combos are readily available from Auto Ord and others.

Perhaps no other firearm has been as maligned and praised as the US M1 Carbine. It has been cursed for lack of power and praised for its reliability and ease of carry. Its .30 Carbine cartridge has been equally maligned for its lack of efficacy and knowledgeable people have gravelly opined you should never fight men with a round you wouldn’t hunt deer with. The .30 Carbine has been used on deer, but is not considered a good choice because the deer may travel far even mortally wounded.

Still, the efficacy of the cartridge is proportional to the attitude of the shootee towards being shot. Whereas a Japanese soldier bent on a suicidal Banzai charge might absorb plenty of the little pills before falling, the average Wehrmacht trooper would be more inclined to seek medical attention after absorbing a round. Deer don’t have any such options, which is why we now consider the .30 Carbine round unqualified as a deer round. In hunting, it is our duty to use a round adequate to anchor the game animal.

Nonetheless, if you ever want to bring someone into the shooting sports  especially the fairer sex  there is no better than the M1 Carbine. It is light, easy to shoot for someone without a lot of upper body strength, kicks just enough and makes just enough noise to keep the shooting interesting. Ammo is still relatively inexpensive and plentiful with all of our major players loading a generic-brand FMJ round. In fact, the biggest argument I ever had with my high school sweetheart was when I traded her carbine for something. Of course, I didn’t know it was her carbine, but I should’ve. The little Winchester M1 was her favorite when we went shooting. I never forgot that lesson (and I’m still learning others).

The Carbine has long been a fun collectible and manufacturers with such aberrant names as National Postal Meter, Rock-Ola, Underwood and IBM are among the makers. It was a post-war staple for firms like Universal and Iver Johnson, but both firms modernized the little rifle too much for my tastes with the stamped, perforated steel upper handguard and light-colored hardwood stock.

Auto-Ordnance, the Tommy Gun makers, finally got it right. They’ve given us basic, late WW2-era M1Carbine. It is sans bayonet lug and adjustable sights, but with later “low wood” as guns issued around the Normandy invasion would have looked. Parts are very evenly grey Parkerized and the wood is walnut finished with linseed oil. It comes with one 15-round magazine or one 10-rounder for us here in California where we ain’t allowed to possess so much deadly firepower.

Accessories available include a sling with oiler and a magazine pouch for the buttstock for two 15-round magazines. I’m not a big fan of the buttstock mounted mag pouch. It unbalances the gun and makes an otherwise naturally pointing gun a little squirrelly to shoot. I will not deny it looks cool and was often seen on the battlefield (and wound up on this one). A GI could carry quite a bit of .30 Carbine ammo  one of its endearing features  and keep the gun on a grab-and-go basis. Were you to choose one of these rifles for defense, there is some comfort in having 45 rounds at your disposal without having to scrabble around for an extra mag.

When the safety is “off” (above) it protrudes from the left side of the triggerguard. The simple, sturdy rear sight is drift adjustable for windage. The stamped, sheet metal buttplate (below) is held in place by one wood screw. The buttstock magazine pouch (here a repro picked up at a local gunshow) slid easily over the stock and holds two 15-round magazine giving the little carbine a total available payload of 45 rounds. 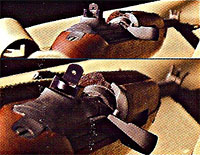 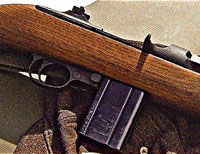 All controls of the M1 can be manipulated by the shooting hand, The safety is just in front of the trigger and pushes in for “fire.” Just ahead of the safety is the magazine release, which also pushes in to drop the magazine. Later Carbines had a lever for the safety as too much Gls with large hands dropped their mags instead of pushing off the safety. 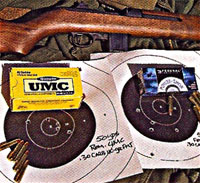 Accuracy was on par with what Jeff has experienced in the past with original M1 Carbines. UMC delivered a 3″ group right in the center of the target, while the Federal delivered a 3 1/2″ group.

I hadn’t shot an M1 Carbine for years and this one was as much fun as I remembered. A good quantity of UMC ball ammo and Federal softpoints were obtained for the accuracy testing. Accuracy was pretty much what I’ve come to expect from the average Carbine. The best 50-yard 5-shot group was 3″ even with UMC and just 3 1/2″ with the Federal. At 100 yards, a 5-shot group was with the Federal softpoints was 8″ with four rounds going into 5 1/2″. It doesn’t sound very special, but all the shots were on target and to point-of-aim. In a fighting situation, I would’ve had a lot of unhappy customers. One nice thing was the groups were pretty much to the same point of aim at 50 and 100 yards.

Standing offhand, it was no trick to quickly and regularly ring the 100-yard steel targets 10 times. The Carbine swung smoothly between them and the sights were easy to align.

The trigger was perhaps the greatest detriment to accurate shooting. It is a heavy two-stage type and the short, heavy, spongy first pull ended in a gritty, creepy final 6-pound let off, according the RCBS Military trigger pull gauge. This one could do with some attention, but I don’t think I’d bother if it were just for me. It’s not that heavy, it just needs to be smoother and such might be accomplished by just shooting a lot more rounds through it. Not to step on the toes of you gunsmiths out there, but I much prefer to shoot guns into smoothness rather than pay to have same done. It’s not like this gun doesn’t work, it shot decently well  at least as well as the old Winchester my girlfriend grieved after.

It’s not to say the M1 Carbine can’t shoot well. Holt Bodinson reports 1 1/2″ 50-yard groups with his Universal M1, so it’s possible. Once again, I believe it might be more productive to spend the money on ammo and enjoy the shooting rather throwing money chasing ultimate accuracy.

I wiped down the exterior and bore with Hoppe’s No. 9 prior to shooting and experienced no malfunctions for the first 80 rounds or so. Then, as the parts wore a bit, a few shiny spots began to show on the bolt. As soon as a round failed to feed all the way, I stopped and oiled the shiny spots with Kal Gard KG-4 oil. No further malfunctions occurred over the next 200-plus rounds.

If you’re not experienced with how the M1 Carbine operates, it is really simplicity itself. Remove the magazine and cycle the bolt. While holding the bolt to the rear, press down on the button on top of the bolt to lock the bolt open. Ensure the chamber and barrel are clear of obstructions. The safety is a push-button mounted on the trigger-guard just behind the magazine release button. Pushed in from the left, the Carbine is on safe and, pushed flush from the right, is off safe. With the muzzle pointed in a safe direction, apply the safety, insert a charged magazine, pull back on the bolt and let go. Allow spring pressure of the bolt to chamber the round.

When ready to shoot, remove the safety with your forefinger (you lefties will have to work this out yourself) and squeeze the trigger. Note: GI mags allow the bolt to close after the last round. The 10-round mag supplied by Auto Ordnance holds the bolt open after the last round. Removal of the Auto Ord mag is easier if the bolt is first locked open. If you’re using GI mags, cycle the bolt to ensure the chamber is clear.

With the cost of original WW2-era GI Carbines skyrocketing out of sight and the cost of Korean War versions climbing steadily, the new Auto Ordnance M1 gives re-enactors a fine copy to work with, while the rest of us get a fine shooter, plinker or defensive rifle. Just remember: If the little lady puts her brand on it, it’s hers  no matter what you think.