Guns Magazine | GUNS OF THE PACIFIC 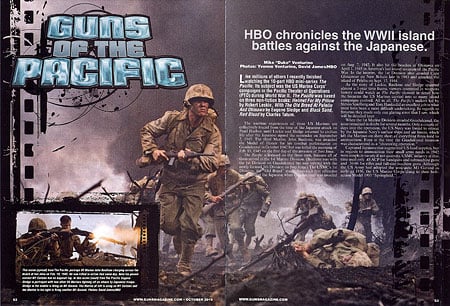 HBO chronicles the WWII island battles against the Japanese.

Like millions of others I recently finished watching the 10-part HBO mini-series The Pacific. Its subject was the US Marine Corps’ campaigns in the Pacific Theater of Operations (PTO) during World War II. The Pacific was based on three non-fiction books: Helmet For My Pillow by Robert Leckie, With The Old Breed At Peleliu And Okinawaby Eugene Sledge and Black Sand, Red Blood by Charles Tatum.

The wartime experiences of three US Marines are collectively traced from the time of the Japanese attack on Pearl Harbor, until Leckie and Sledge returned to civilian life after the Japanese signed the surrender on September 2, 1945. The third Marine, John Basilone, was awarded the Medal of Honor for his combat performance on Guadalcanal in October 1942 but was killed the morning of Feb. 19, 1945 on the first day of the invasion of Iwo Jima.

The Pacific is focused on the three men, because all of them served in the 1st Marine Division. (Basilone was with the 1st Division on Guadalcanal but was serving with the newly formed 5th Division on Iwo Jima.) The USMC’s 1st Division, the “Old Bleed” made America’s first offensive move against the Japanese when Guadalcanal was invaded on Aug. 7, 1942. It also hit the beached of Okinawa on April 1, 1945 in America’s last island invasion of the Pacific War. In the interim, the 1st Division also invaded Cape Gloucester on New Britain late in 1943 and attacked the island of Peleliu on Sept. 15, 1944.

As the story of Leckie, Basilone and Sledge spanned almost a 3-year time frame, viewers interested in weapons history could watch as The Pacific showed in detail how the firearms the US Marines carried into so many island campaigns evolved. All in all, The Pacific’s makers led by Steven Spielberg and Tom Hanks did an excellent job in what must have been a most difficult undertaking. In regards to firearms they made only one glaring error that I saw, which will be detailed later.

When the 1st Marine Division invaded Guadalcanal, the issue remained in doubt for several months. Only a couple of days into the operation, the US Navy was forced to retreat by the Japanese Navy’s surface ships and air forces, which left the Marines on shore short of everything from food to ammunition. Even at the time the Guadalcanal invasion was characterized as a “shoestring operation.”

Captured Japanese rice augmented US food supplied, but in regard to ammunition their small arms needs in 1942 were simple in variety if not quantity. USMC infantry at that time used only .45 ACP for handguns and submachine guns and .30-06 for rifles and full-size machine guns. Although the US Army had adopted the semi-auto M1 Garand as early as 1936, the US Marine Corps clung to their bolt-action Model 1903 “Springfield.”

They considered the ’03 more accurate and reliable than the new semi-auto, despite the fact the M1 could fire eight rounds with a pull of the trigger for each, while the ’03 required bolt manipulation for every one of the five rounds its magazine held. In the close range jungle combat that was more the rule on Guadalcanal, precise accuracy was not as important as firepower, as ordinary Marine infantryman quickly realized. The .30-06’s long-range capability was not needed in the jungle, but its ability to penetrate foliage and even trees was appreciated.

Perhaps the most important infantry weapon on Guadalcanal, as well portrayed in the mini-series, was the belt-fed Browning Model 1917 water-cooled heavy machine gun (also .30-06). Both Leckie and Basilone were machine gunners on “the ‘Canal” as Marine lore came to call the island. Respectively, they participated in stands against fanatical Japanese attacks at the Tenaru River in August (it was actually the Ilu River; Marine maps were that poor), and on a ridge south of the all-important American airfield in October. The Marine’s defense in both fights centered on those big tripod-mounted Brownings. Also at that time, USMC machine gunners’ personal weapons were pistols. They were the 1911A1 .45 ACP and The Pacific showed both Leckie and Basilone using theirs.

Gun savvy viewers probably noticed much firearms detail in the Guadalcanal segments of The Pacific. I saw at least one Reising submachine gun in the hands of an officer leading a patrol, and several scenes with Thompson submachine guns fitted with drums. Marines liked Thompsons but detested Reisings because combat conditions made them very unreliable. They were withdrawn from service shortly after Guadalcanal.

The Model 1928 Thompsons available in 1942 could use 50-or even 100-round drum magazines while later versions took only 20- or 30-round stick magazines. Also in the scenes showing the night fighting, for which Basilone was rewarded the Medal of Honor, was a Marine helping to defend the machine gun position. He is shown firing a Winchester Model ’97 pump action, 12-gauge shotgun.

In late October 1942, the US Army’s 164th Infantry Regiment arrived on Guadalcanal with its riflemen carrying M1 Garands. Marine were famous for their pilfering of Army stores whenever possible and one of the mini-series’ scenes shows how disgusted a young Marine was upon opening a crate of Garands while raiding a supply dump. He says something to the effect, “The Army gets these while we fight with rifles my grandfather would have used!” Soldiers of the 164th Infantry have said if they set down their Garands and turned their backs for just a moment a Marine’s arm would snake out of the jungle and swipe it. So many were taken that when the 1st Marine Division finally left Guadalcanal in December 1942, US Army officers were stationed at embarkation points to confiscate all M1s carried by Marines.

After recuperating in Australia from their ordeal on Guadalcanal, the 1st Marine Division’s next invasion was Cape Gloucester on the soggy, swampy island of New Britain. This was just after Christmas 1943, and by this time the USMC was re-equipped. Now the average rifleman was also packing an M1 Garand, while members of crew-served weapons such as machine guns and mortars had M1 Carbines. The weapon used its own dedicated cartridge, so Marine supply officers had to add .30 Carbine ammunition to .30-06 and .45 ACP.

It is also very interesting how Sledge’s handgun was portrayed later after the 1st Division landed on Peleliu. By then, the Japanese seldom engaged in those life-wasting, nighttime, “Banzai charges” so common early in the war. Instead they held up in caved and bunkers, trying to inflict as many casualties on the Marines as possible before dying themselves. At night infiltrators were sent crawling into Marine lines, with the hopes they could slay sleeping Marines in their foxholes or at least keep them so on edge no one rested. Those infiltrators were not expected to return. In nighttime Peleliu scenes in The Pacific Sledge is shown gripping his Colt New Service, notably with his finger off the trigger. (Evidently they had good firearms instructors for the young actors of this production.)

The gun handling shown in The Pacific was realistic. Nowhere was there wild hip shooting with Thompsons, Carbines or rifles. Most shooting was aimed fire from the shoulder as befit US Marine WWII training in rifle marksmanship. During the scenes of the wild melee on that October 1942 night when John Basilone’s fighting resulted in his Medal Of Honor, they do show the machine gunners swinging their Browning 1917s to and fro instead of having them being locked into set fields of fire. Those who have fired such machine guns swinging loosely know how badly they spread bullets in that manner.Still, with the entire front covered with Japanese attackers, it is possible the Marine machine gunners did have to fire like that. Also, during those battle scenes Marines are shown working their Springfields’ bolt with the rifle still shouldered. That is how they would have been trained.

Also, it was refreshing to see how the M1 Carbine was used in The Pacific. The little 5-pound .30 Carbine was not meant as an offensive weapon. It was intended for officers, dog handlers, corpsman, wireman and members of weapons crews to defend themselves from the enemy while going about their duties. Such duties didn’t usually mean fighting with a rifle. During Part 8 of the mini-series, Sgt. Basilone is shown rushing about the Iwo Jima battlefield directing his machine gun crews as to where to set their guns and where to place their fire. He carries an M1 Carbine but doesn’t actually fight with it. When he does decide to fight himself. He is shown handling off his carbine to one of his men and picking up a 1919A4 from its tripod.

American fighting men were blessed in WWII as the only nations’ troops almost universally equipped with autoloading weapons or at least so after 1943. In Part 9 there is an instance when the more intricate mechanism of the semi-auto was not so beneficial. With Eugene Sledge on Okinawa, a Japanese charge occurs, right after he has fallen in the mud. (During the fighting on Okinawa in one 15-day period over 17” of rain fell.) His M1 Carbine is covered in slime, so he picks up someone else’s dry M1 Garand. When it is empty he draws the Colt New Service revolver. The history of the 36-day battle for Iwo Jima is full of stories of both M1 Garands and M1 Carbines clogging with the island’s black volcanic ash.

Expect for the part about Robert Leckie’s Japanese Type 14 Nambu, not much is made of Japanese small arms in The Pacific. In fact few close ups of Japanese soldiers were shown at all, and mostly then their rifles were bayoneted. In WWII, Japanese infantry doctrine stressed bayonet fighting as much as the USMC stressed rifle marksmanship. I did spot in one Peleliu scene one Japanese rifle lying on the battlefield, with its action’s dust cover still in place. Both Japanese Type 38 6.5mm and Type 99 7.7mm infantry rifles were issued with such dust covers.

All in all firearms coverage in The Pacific was excellent. The M1 Carbines all were sans bayonet lugs but did have the L-shaped rear peep sight proper for the time. Those are tiny details but significant to sharp-eyed gun people. So then one has to ask why The Pacific’s firearms’ advisor, whoever he was, had the Marines on Guadalcanal armed with Model 1903A3 rifles, instead of the proper Model 1903s? The rear peep sight of a Model 1903A3 sticks out like a sore thumb and several close-up shots show them. That alteration of the Model 1903 was not approved until May 1942, and the Marines did not have them on Guadalcanal.

That one mistake aside, The Pacific was an excellent production, at long last showing just how hard the climate, tropical diseases, and the fanatical enemy hammered America’s Marines on those Pacific Islands. After viewing HBO’s The Pacific anyone meeting one of those veterans should feel humbled.

HBO plans the release of the The Pacific DVD on Nov. 2, 2010. For those of you with cable, episodes are available for viewing On Demand. — Editor