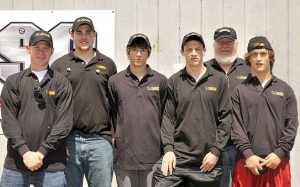 Coach John Gunshenan told the Crier, “A group of Wayland High School kids formed this team 6 weeks ago, and asked me to help coach them. They spent the last 4 weeks preparing for this match. The kids set a goal of beating one team at least, which later progressed to beating Harvard and Yale, which they accomplished. When we started, most kids on our team had never fired a pistol, and some had never fired a gun at all. They’ve all worked hard, and made tremendous progress. AWARE.org taught all the kids and half their parents the Mass-approved Basic Firearms Safety course. Their State Firearms Safety Certificates show that they know how to shoot safely, and today’s results show that they also know how to shoot competitively. The kids had a blast, and we’re thrilled with their progress.”