Yes, new and improved, thanks to Kahr Arms! 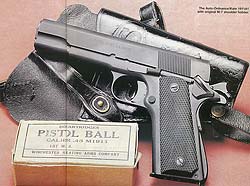 The Auto-Ordnance/Kahr 1911A1 with original M-7 shoulder holster.

Until now, in my opinion, putting the name Auto-Ordnance and 1911 together did not indicate quality. Economy, yes; reliability with GI ball, yes; accuracy, maybe; fit and finish, no. But, as they say, that was then and this is now. The Auto-Ordnance Company is now owned and operated by Kahr Arms, the manufacturers of quality pistols sold at a fair price. With the addition of Kahr’s engineering expertise and uncompromising quality control, the Auto-Ordnance gun has gotten more than a simple facelift. Now, the Auto-Ordnance 1911, judging from my sample, is a well-made and accurate 1911, well suited for personal defense, home protection or practical shooting, such as is found in International Defensive Pistol Association (IDPA) events.

Samples of the new Auto-Ordnance/Kahr 1911 were on display at the Kahr Arms booths at the Sporting, Hunting and Outdoor Trade (SHOT) and the National Rifle Association (NRA) shows this year. The pre-production samples looked good and Kahr Arms’ Frank Harris said one would be on its way as soon as the guns were in full production. I got the impression that this statement also implied this would be when everyone was assured that all the quality controls were all in place and working. I say this because in interacting with any number of Kahr Arms representatives over the years, it is obvious they are quite proud of their products and don’t want to make or ship anything that isn’t first quality.

Out of the box, the Auto-Ordnance 1911 looks to be a newly manufactured twin to a World War II 1911A1 with some exceptions. The finish is similar to that used by the 1911 manufacturers during WWII, which was either a Parco-Lubrite finish, a manganese-based phosphating process used by Colt, or Parkerizing, which uses a zinc base. The Parker Rustproof Company of Detroit, Michigan developed both processes. The more familiar green-and-gray-hued finish fond on many U.S.WWII military arms came later.

The AO slide (front) has a larger ejection port than the WWII slide (rear).

The grip safety and hammer can pinch your hand if you aren’t careful.

Frame markings show the maker to be “Auto-Ordnance, Worcester, MA.”

Field stripping the Auto-Ordnance is simple and very “GI.”

The grip panels are checked brown plastic and the arched mainspring housing has the obligatory lanyard loop. The sights are identical to the WWII guns, with small ramped front and square notch rear. The Auto-Ordnance uses a seven-round Metalform magazine with the normal flat-shelf follower but with an easily removable metal base plate. (The Metal Form Corporation made magazines during WWII, but I’m not sure if the current company and the historical company share a lineage.)

The slide serrations are slanted as is found on Drake-manufactured National Match slides and also the Colt Gold Cup model, rather than running vertically, as on the original. The ejection port window is lower (that is, larger) than on the WWII guns. The Auto-Ordnance 1911 uses a long, grooved 1911 trigger rather than the short, stamped 1911A1 trigger, and the frame is scalloped behind the triggerguard as is normal for 1911A1 pistols.

Consulting Charles W. Clawson’s book, Colt Service Pistols, Models of 1911 and 1911A1 (published in 1993 and available from Charles W. Clawson, PO Box 15216m Dept. CH, Fort Wayne, IN 46885), and matching up parts, it looks like the hammer is a copy of the short, wide, Colt hammer adopted i 1939. The grip panels follow the style of the Key Fibre Company-manufactured plastic grips made with small reinforcing rings around the screw holes with reinforcing ribs on the interior surfaces. Also according to Clawson, the WWII mainspring housing with seven grooves and lanyard loop, as with the Auto-Ordnance, was of Colt manufacture. The thumb safety is of the post-WWII design, a full shelf on a plate, grooved and rounded, as opposed to the “stub” design from during the war years. Internally, the parts are standard 1911 except that the barrel chamber mouth is throated from the 4 to 8 o’clock area. The recoil spring is fairly strong with what feels to me to be a 17 pound recoil spring. (Current Colt springs run 16 pounds.)

After doing the usual rack and click dry-fire exercises with the gun, Joe Venezia and I grabbed a bag of assorted .45ACP ammo and went to the range to see just what kind of magic Kahr had managed to do to the Auto-Ordnance gun.

My range work is about as familiar and comfortable as an old shoe. I split the work into two or three segments.

First is the accuracy work, then defensive drills and, if indicated, chronograph work. If all goes as anticipated, a second trip is usually done to run the gun a bit more and clear up any gray areas that may have arisen. If the gun is suited for them, I’ll put some 200-grain and 230-grain JRN lead reloads through it using Rogers Bullets and John Lysak or Joe Venezia reloads. I also like to offer the gun around to any other shooters at the range to get their impressions.

The particular day we went to the range was just perfect for shooting the original 1911A1 sights with high bright sun and occasional clouds. Lot of light for aging eyes. The Auto-Ordnance sights will be familiar to anyone who’s handled a GI gun. Ramp front and square notch rear, but they are small! To do anything with them, I need a good trigger, clean breaking and not heavier than six pounds. Well, the Auto-Ordnance obliged me on this score with a 5.5-pound trigger weight. I started off with, what else, the equivalent of GI hardball; in this case, PMC 230-grain JRN, since this is the primary – and normally the only – food group digestible by a GI 1911.

These five shots are the first five rounds fired from the new gun – a group less than 3 inches at 25 yards! 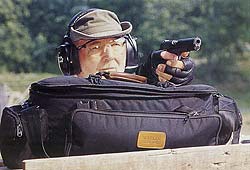 The author found the AO 1911A1 to be a quality gun – accurate and reliable.

As an aside, there might be room for a bit of criticism in that I shoot the gun for accuracy and judge its reliability right from the first shot. The common wisdom is that most handguns need at least 50 rounds put through them to “break them in.” While this is the case in many instances, it’s also true that most gun buyers don’t have a spare $50 or so to spend on ammo just to make sure the parts finally all go together. One would think this is what you paid for. Also, many gun buyers are not aware of this need and may well be putting their life on the line using the gun for personal defense after only firing it a few times, if at all.

Back to the Auto-Ordnance. The 230-grain ball went into a 3-inch group for the first five shots. As they say in investigative circles, this was a clue. If the group wasn’t a fluke, the gun looked to be a shooter, for as the guns are shot a bit, generally everything gets better. Joe duplicated the first group and we finished up the 50-round box. I pulled out some Hornady 200-grain JHP and began with a cartoon-like question balloon over my head that said: “Will this gun work with JHPs?” With the Hornady, everything was a go. The group got a little bit smaller without any stoppages. I then took out a box of ProLoad Tactical 200-grain JHP +P and ran 20 of these through the gun. Again, a good group and no malfunctions. We did the same drills with Remington Golden Saber 185- and 230-grain JHP as well. I then moved to Triton and Cor-Bon +P JHPs. Now I figured I was pushing the gun a bit, but it didn’t seem to notice and we shot up another two boxes of 20 each. We were still getting groups of three inches or less. Amazing. The gun works with both standard and designer ammo at regular and hyper velocities. The slide locked back on the empty mag and the brass ejected up and to the right rear (without the GI case mouth dent!). Everything worked as John Browning and the U.S. Army Ordnance board designed it to do.

The defensive shooting phase went equally well, again with no malfunctions, using Joe’s and John’s 200- and 230-grain SWC and JRN lead reloads. I admit I didn’t draw and fire as quickly as I do normally, but I have the hammer bite scars to prove that I’ve shot a standard-grip-safety 1911. I just didn’t care to repeat the experience, so I was careful about how high I gripped the gun. Will everyone get a hammer bite from this gun? It depends on how you grab and/or hold it. If you take a very high grip and force the web of your shooting hand up and into the grip safety, probably. That’s why there are so many beavertail grip safeties sold each year. (You can get drop-in aftermarket safeties, maybe with a little fitting needed, from a number of sources. Wilson’s Combat and Ed Brown come to mind.)

So, after all this, what we have is a well-made 1911A1 that follows the original WWII design with the few added improvement that enhance function. A work horse, if you will, with no frills. Checking a recent firearms distributor’s sales bulletin, the Auto-Ordnance is wholesaling for a good bit less than list prices, which may vary a bit from those listed here. The Auto-Ordnance is good “as is” or as a solid platform on which to add those items a user considers necessary for the perfect enjoyment of a 1911 such as larger sights, beavertail grip safety and some change to the front strap for additional secure gripping. Of course, there’s a plethora of wooden checkered grips for the 1911 at a price that shouldn’t hurt anyone’s wallet.

The new Auto-Ordnance 1911A1 is shipped with one magazine in a lockable plastic hard-sided case, along with the cable lock, warranty, and instruction book (read this!). One nice touch: The cable lock comes already installed on the gun, running through the ejection port down through the magazine well. You can’t say you don’t know how to use it or that it wasn’t included.

Auto-Ordnance 1911s come in three grades: WWII parkerized, Standard, and Deluxe blue. The standard gun is blued while the Deluxe is blued with high-visibility three-dot sights and wraparound rubber grips.