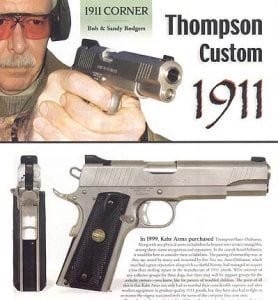 In 1999, Kahr Arms purchased Thompson/Auto-Ordnance. Along with any physical assets included in the buyout were certain intangibles, among these, name recognition and reputation. In the case of Auto-Ordnance, it would be best to consider these as liabilities. The passing of ownership was, as they say, noted by many and mourned by few. You see, Auto-Ordnance, which once had a great reputation along with a colorful history, had managed to acquire a less than sterling repute in the manufacture of 1911 pistols. We’re unaware of any collector groups for these dogs, but there may well be support groups for the unlucky owners – you know, like for parents of troubled children. The point of all this is that Kahr Arms not only had to marshal their considerable expertise and ultra modern equipment to produce quality 1911 pistols, but they have also had to fight to overcome the stigma associated with the name of the company they now own.

Due to the spiraling popularity of the 1911 pistol, it seems that almost every manufacturer of handguns has decided to become a player in the 1911 marketplace. This is a win-win situation for buyers. There has never been a time where you’ve had so many choices, not only of manufacturers, but also in options and pricing. Add-ons, like extended safeties, highly-visibility, low-profile sights, and beavertail grip safeties were, up until just a few years ago, only available at considerable added expense from the benches of working pistolsmiths.

The “new” Auto-Ordnance Corp. first tested the market with a basic mil-spec 1911, and we reported on that pistol in a past issue of On Target. It was a huge improvement over the “old” Auto-Ordnance offerings, but the tarnished image associated with A/O continued to plague them, and the decision was made to focus attention on the Thompson brand.

The Thompson Custom is the company’s latest offering. Built on a cast frame, and with a slide machined from bar stock, this stainless 1911, chambered in .45 ACP, has the features most seasoned shooters are demanding on their guns. The slide features cocking serrations fore and aft. Front serrations were first added by custom smiths to aid hand cycling a pistol with optical sights attached, but they are now de rigueur for many shooters, aiding in press checks to verify a loaded chamber. The low-profile black sights are dovetailed into the slide top. Both front and rear are serrated, and provide a crisp sight picture. The ejection port has been lowered and flared, and a full-length guide rod is installed. The barrel, throated for hollowpoints, exhibited the best upper end fit we’ve seen in a production pistol. Happy accident or not, the hood fit into the slide recesses was almost light tight on the sides and the rear. This assures that the barrel will return to exactly the same position in the slide, shot after shot – one of the key ingredients in accuracy. The underside of the slide has a cutout for a firing pin block safety plunger that will be instantly recognized by owners of Colt Series 80 1911s; it’s a dead ringer. More on the Series 80 safety system will follow.

The frame has 20 LPI checkering on the front strap in three-quarters coverage. Instead of edge to edge, only the front gripping surfaces are checkered. A nicely-made polymer mainspring housing has molded checkering to complement the front strap. The Thompson had a narrowed, lightened hammer to both reduce lock time and to prevent frame interference as it falls. The beavertail grip safety has the tail narrowed; though strictly cosmetic, it’s still a nice touch. The insurance pad, on the other hand, is totally functional; it helps ensure full depression of the grip safety. A clean bevel on the radius of the mag release makes the gun a little more hand friendly. Razor sharp edges in this area are common, and a pet peeve of ours. An extended mag release is installed just below a slotted, lightened, short trigger with overtravel adjustment.

The frame feed ramp was polished to assist reliable feeding. A slightly extended ejector makes sure the empty brass clears out; the moderate length is beneficial when ejecting a live round. The edges of the magwell were beveled to aid positive insertion of fresh magazines. The 7-round magazine supplied with the Thompson Custom is manufactured by the same company that makes magazines for the entire Kahr line-up of pistols. It features a rounded steel follower, a welded-on baseplate predrilled for a slam pad (not included), and witness holes for verifying round count.

Most shooters insist on an extended thumb safety, finding the abbreviated style used on mil-spec style pistols too short and too narrow for positive manipulation at speed. The Thompson addresses this concern with a safety that is extended not only in length, but also in width. This is sure to get approval from those who use a “thumb-over-safety” grip. Dark brown laminated grip panels with a centered medallion bearing the Thompson name and logo set off the matte stainless of the pistol, and are fastened with Torx head grip screws.

The trigger pull measured 5.5 pounds and was gritty when we first received the gun. A thorough cleaning of the fire control and firing pin safety components went a long way toward smoothing the pull. When fully cleaned and lubed, the trigger settled at 5 pounds even, with a small amount of creep and no overtravel. The job of the safety parts in this pistol is to prevent the firing pin from striking the primer unless the trigger is pulled. This system-cloned from the Series 80 Colt pistols-is street proven and has been in use for years. Proper timing of the parts is absolutely critical for reliable function. The firing pin block, activated by the safety levers, must clear the way for the firing pin to have an unimpeded strike on the cartridge primer by the time all of the slack or pre-travel is taken up, at the beginning of the trigger pull. Mistimed pistols will exhibit damage to the blocking plunger and firing pin, and misfires can occur from light primer strikes. Uninformed adjustment of the trigger overtravel screw in some pistols adds to the problem, since this inhibits trigger travel and the amount the blocking plunger can be moved by the actuating levers. In our test pistol the overtravel stop could be tightened to the point that the hammer wouldn’t quite fall, but the firing pin was completely clear to move. That’s exactly how it should be when the system is working as designed. Oh, and contrary to popular opinion, excellent trigger pulls can be achieved in Series 80-style pistols.

The Thompson Custom proved a reliable performer during test firing. The only problem noted was one failure of the slide to lock back on an empty magazine, an anomaly we couldn’t duplicate again during our session. Accuracy was beyond good. The Thompson exhibited stunningly small group sizes, no matter what loads were run through her. There were no clear-cut winners in the ammunition used, although a group of five at just under an inch, from 25 yards with Remington UMC 230-grain FMJ, is certainly noteworthy. With the new ownership and their commitment to quality, this nice-looking, accurate, reliable pistol should go a long way toward redeeming the name and helping restore the Auto-Ordnance/ Thompson company back to its rightful place in history. See the Thompson Custom 1911 at your local gun shop.